"A great warrior must be in tune with all of his senses. Only then will you be able to extend your awareness so that you may fight on any level. Try again."
― Grand Master (Samurai Jack)

"My parents taught me to hone my senses, Zod. To focus on just what I wanted to see."
― Superman, Man of Steel

"Take away the perception and leave it all to Spectacular Spider-Sense."
― Peter Parker/Spider-Man (Marvel Comics)

The power to focus senses to look for a particular sight/sound/smell/taste/feel by blocking out all others. Sub-power of Enhanced Senses and Overclocking.. Variation of Body Supremacy. Not to be confused with Sense Augmentation.

User can focus their senses to look for a particular sight/sound/smell/taste/feel and blocking out all others.

Buffy Summers (Buffy the Vampire Slayer) focuses her senses in order to detect and attack the invisible Marcie Ross. 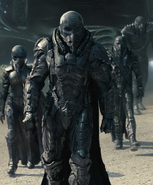 General Zod's (DC Extended Universe) Breather allows him to filter his senses while on Earth.

By focusing his senses, Super 17 (Dragon Ball GT) can feel even minuscule changes in the air, allowing him to predict Goku's Instant Transmission.

Vash (Trigun) was able to focus all of his senses on an injury to protect himself from Dominique's hypnotic power.

Ikki Kurogane (Rakudai Kishi no Cavalry) has full mastery over his body including his five senses and controlling the details of what he can see.

By focusing his senses, Wolf Link (The Legend of Zelda: Twilight Princess) can track scents he finds...

...and see what is usually invisible to the naked eye, such as ghosts.

By concentrating hard enough and focusing his 'antennae', Ryo Shimazaki (Mob Psycho 100) can use his Super Sensory Zone - Mind's Eye to sharpen his extrasensory perception until all he can "see" are the objects of his focus, in this case other esper's auras.

By ignoring all of his other senses, Peter Parker/Spider-Man (Marvel Comics) can focus his Spider-Sense to locate specific targets.

Spider-Man's Suit (Marvel Cinematic Universe) is designed with special lenses that help him filter and focus his senses.

Shinichi Izumi (Parasyte) can focus on his senses ever since merging with Migi's cells.

As a Synesthete Alpha, Rachel Pirzad (Alphas) can focus any of her senses at will.
Add a photo to this gallery
Retrieved from "https://powerlisting.fandom.com/wiki/Sense_Focusing?oldid=1749938"
Community content is available under CC-BY-SA unless otherwise noted.