Spider-Man (Marvel Comics) was able to heal his optic nerves after being blinded by a ray meant to paralyze them.

The user can regenerate their senses/sensory organs should they be harmed, or even grow a new one altogether.

Spike (Buffy the Vampire Slayer) had his eardrums poked out to make him immune to sirens...

...and regenerated them in mid-fight. 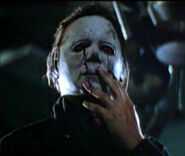 Michael Myers (Halloween series) was able to regenerate his eyes after they were shot out.

...but healed the damage and regained his eyesight afterwards.
Add a photo to this gallery
Retrieved from "https://powerlisting.fandom.com/wiki/Sensory_Regeneration?oldid=1721016"
Community content is available under CC-BY-SA unless otherwise noted.