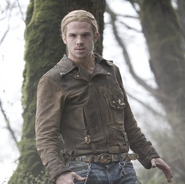 As a sensor-type shinobi, Ino Yamanaka (Naruto) can detect and track down targets through their chakra signatures.

Karin (Naruto) can use her unique sensory ability, the Mind's Eye of the Kagura, to track any targets through their chakra signature better than any other sensor.

Tom Turbo (Tom Turbo) can track down missing people/objects/animals using one of his 111 tricks.

Bloodhound (Apex Legends) can use the Eye of the Allfather ability. This allows him to scan and detect the movements of his opponents.
Add a photo to this gallery
Retrieved from "https://powerlisting.fandom.com/wiki/Sensory_Tracking?oldid=1702228"
Community content is available under CC-BY-SA unless otherwise noted.