The Mother Box (DC) can grant sentience to non-sentient beings.

The power to grant sentience to non-sentient beings. Technique of Sentience Manipulation.

The user can grant non-sentient beings with the ability to feel, perceive, or be conscious, or to have subjective experiences. They may also remove sentience from sentient beings so that they hold domain over them. 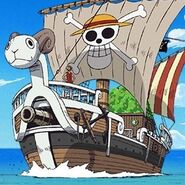 The Straw Hat Pirates (One Piece) took such great care and love for their ship, the Going Merry, that it gave the ship sentience, for it to speak and sail on its own.

Thanks to the power of her Soul-Soul Fruit/Soru Soru no Mi, Charlotte Linlin/Big Mom (One Piece) granted ordinary objects, plants, animals, and weapons sentience by placing soul fragments into them.

Some factions of the Church of the Broken God (SCP Foundation) believe that Mekhane bestowed humanity with sentience shortly after Yaldabaoth created them.

The Chess Pieces' queen, Diana (Marchen Awakens Romance) used powerful dark magic to give a doll named Pinocchion his own consciousness.
Add a photo to this gallery

Rick and Morty - You pass Butter
Add a photo to this gallery
Retrieved from "https://powerlisting.fandom.com/wiki/Sentience_Inducement?oldid=1664302"
Community content is available under CC-BY-SA unless otherwise noted.