The Kabbalah - The Tree of Life

Gain the aspects and powers of the Sephirots which compose the Kabbalist Tree of Life.

The power to be empowered by  the aspects and powers of the Sephirots which compose the Kabbalistic Tree of Life. Variation of Affinity.

User is empowered by the Sephirot of the Tree of Life in Kabbalah, allowing them to tap on the primal, undiluted forces of creation/divine.

The tree, visually or conceptually, represents as a series of divine emanations God's creation itself ex nihilo, the nature of revealed divinity, the human soul, and the spiritual path of ascent by man. In this way, Kabbalists developed the symbol into a full model of reality, using the tree to depict a map of Creation.

Sephirot (/sfɪˈroʊt/, /ˈsfɪroʊt/; Hebrew: סְפִירוֹת‎ Səphîrôṯ), meaning emanations, are the 10 attributes/emanations in Kabbalah, through which Ein Sof (The Infinite) reveals himself and continuously creates both the physical realm and the chain of higher metaphysical realms (Seder hishtalshelus).

Once, Promethea (Wildstorm) walked through the Kabbalah and even gained the ability to mimic the essence of binah. 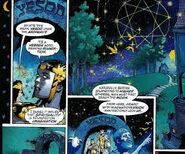 the tree of life
Add a photo to this gallery
Retrieved from "https://powerlisting.fandom.com/wiki/Sephirot_Empowerment?oldid=826822"
Community content is available under CC-BY-SA unless otherwise noted.