Use the traits of seraphim.

The power to use the abilities of a seraphim. Variation of Angel Physiology.

User with this ability either is or can transform into one of the seraph (pl. seraphs or seraphim), a type of celestial or heavenly being in the Abrahamic religions, associated with the Cherubim, and later taken to be angels. The root of Seraphim comes either from the Hebrew verb saraph ('to burn') or the noun saraph (a fiery serpent), because the term appears several times with reference to the serpents encountered in the wilderness, it has often been understood to refer to "fiery serpents." From this it has also often been proposed that the seraphim were serpentine in form and in some sense "fiery" creatures or associated with fire. It is said that whoever lays eyes on a seraph would instantly be incinerated due to the immense brightness of the seraph. 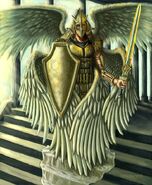 A Seraph stands ready for battle. 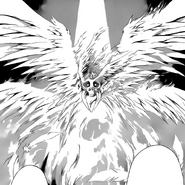 Metatron (Dogma) is a Seraph, the highest choir of angels.

Gabriel (Highschool DxD) one of the Four Great Seraphim.

Michael (Highschool DxD) Archangel and leader of the Seraphim.

After he was resurrected by God after being killed by Lucifer, Castiel (Supernatural) became a seraph.

Szuriel (Pathfinder), the Archdaemon of War, is known as, among other things, the Seraph of Destruction, with the fire to back up the name.

The Four-Faced Man/The Seraph (The X-Files) revealing his true appearance to the last of the nephilim children.

Seraphimon (Digimon)
Add a photo to this gallery
Retrieved from "https://powerlisting.fandom.com/wiki/Seraphim_Physiology?oldid=1741507"
Community content is available under CC-BY-SA unless otherwise noted.