Tong Zing (The Incredible Hulk) curing the Hulk by granting him serenity.

"JoJo's mother, Ms. Holly, is a woman capable of calming the hearts of others. People feel at ease around her."
― Noriaki Kakyoin (JoJo's Bizarre Adventure Part III: Stardust Crusaders)

The power to induce feelings of serenity in others. Sub-power of Serenity Manipulation. Variation of Mental Inducement. Opposite to Anxiety Inducement.

The user is able to induce powerful feelings of tranquility in others, allowing one to keep others calm and peaceful.

Eunice's (Ben 10: Ultimate Alien) mere presence causes even vicious animals such as bears to be calm and docile.

Fluttershy (My Little Pony: Friendship is Magic) is able to calm down the most fearsome of beasts with her kindness. 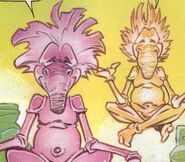 The Kaamdaarn (Sonic the Comic) are powerful users of this ability.

Panacea (Valkyrie Crusade) has soothing powers, allowing her to induce calmness and tranquility from just looking at her. 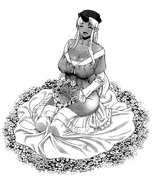 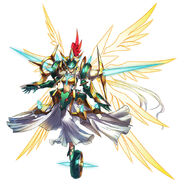 Ophanimon X (Digimon) can cause others to be overcome with serenity just by the sight of her. 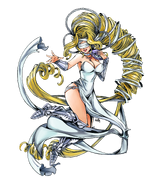 Venusmon's (Digimon) Healing Therapy causes anyone affected by it to calm down and lose their fighting spirit.

Sanzomon (Digimon)
Add a photo to this gallery
Retrieved from "https://powerlisting.fandom.com/wiki/Serenity_Inducement?oldid=1742042"
Community content is available under CC-BY-SA unless otherwise noted.