Use the powers and traits of a sexual deity.

"It's a big sexy world of sex out there, people having intercourse everywhere. So many types of sex to choose, we understand if you're confused. We need a god for these sexy times, with confidence and seductive chimes. He lives up in a secret lair and he's not a fan of underwear."
― Trojan man (It's a big sexy world)

The power to use the powers and traits of a Sexual Deity. Variation of Love Deity Physiology. Opposite of Virgin Goddesses.

The user either is or can transform into a Sex Deity, a god/goddess who represents and is associated with the sex, sexuality, and pleasure, as well minor powers of love, lust, desire, fertility and beauty. Sex Deities can be found throughout most of recorded history in various forms.

Pan (Greco-Roman Mythology), like some Satyrs, is portrayed as a very lustful deity and and has lusted after several nymphs.

Eros/Cupid (Greco-Roman Mythology) god of sexual love and desire. Alternately, he was the protogenoi of love, desire and sexuality.

Priapus (Greco-Roman Mythology) is a fertility god of sexuality; he represents masculinity by his phallus.

Freyja (Norse Mythology) the goddess of love, beauty, fertility, sex, war, gold, and seiðr. Many consider her to be the Norse equivalent of Aphrodite.

The Triple Goddess (Wiccan Mythology) is a trinity goddess of the Maiden, the Mother and the Crone, each representing the feminine aspect, including sexuality.

The Horned God (Wiccan Mythology) is a male counterpart and lover of the Triple Goddess, and represents masculine aspects which include sexuality. 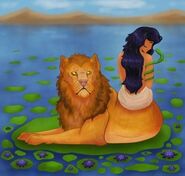 SCP-4960 - Why the Foundation Funded a H***** to Awaken a Sumerian Love Goddess (OR: How I Learned to Stop Worrying and Love Kedesh-Nanaya) (SCP Foundation) is based off of the Mesopotamian Sex Goddess of the same name.
Community content is available under CC-BY-SA unless otherwise noted.
Advertisement