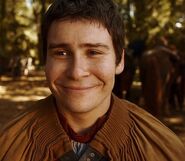 James Bond is infamous in the spy business for his ability to sometimes turn a villain's top henchwoman into an ally, or gain impressive intel from female witnesses.
Add a photo to this gallery
Retrieved from "https://powerlisting.fandom.com/wiki/Sex_Specialist?oldid=507588"
Community content is available under CC-BY-SA unless otherwise noted.