Priapus (Priapus) was charged by Zeus to bring extinction to humanity by making all men homosexual, being able to do so one at a time almost effortlessly.

"Who's that side of beef munching on our sister? I don't know. But in this reality I am not gay."
― Alternate Reality Patty and Selma Bouvier (The Simpsons)

"Good for you, soldier. You learned that army men come in all orientations, but we're all molded from the same crappy plastic. Permission to pair up, sir?"
― Abe Simpson's molded Army Men (The Simpsons)

The power to manipulate sexual orientation. Sub-power of Tantric Manipulation.

...the Occult Club causes Nami Kozono - who is a lesbian - to become sexually and emotionally dependent on Hiratani. 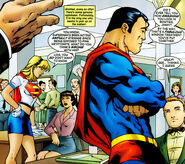 Joanna Frankel (Eastwick) using this power on a gay man.

After being injected by a distilled Gay Gene Drug (Family Guy), Peter - for a limited time - becomes homosexual.

Aphrodite/Venus (Greco-Roman Mythology) the goddess of love, beauty and sexuality.

The God Tool No. 5 - Do-me-nator (Priapus) is a gun made of divine technology that measures and alters the sexual orientation of others.

Aphrodite (Valkyrie Crusade)
Add a photo to this gallery
Retrieved from "https://powerlisting.fandom.com/wiki/Sexual_Orientation_Manipulation?oldid=1766370"
Community content is available under CC-BY-SA unless otherwise noted.