Ilia Amitola (RWBY) can turn her skin black to blend into the darkness.

The power to become invisible while in shadows. Sub-power of Darkness Manipulation. Variation of Camouflage and Elemental Invisibility. Opposite to Photokinetic Invisibility. Not to be confused with Shadow Stealth.

The user is able to become undetectable as long as they are in darkness or shadow.

Shadows and darkness are the Xenomorphs' (Aliens/Aliens vs. Predator) greatest allies.

Evelynn, the Widowmaker (League of Legends) 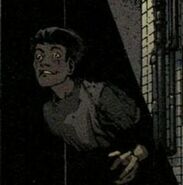 If SCP-017 - Shadow Person (SCP Foundation) is in contact with darkness, it can remain invisible.

Diabound (Yu-Gi-Oh!) using "Dark Camouflage" to hide in the darkness, but is ineffective in the light.

Sung Jin-Woo's Shadow Soldiers (Solo Leveling) can hide and store themselves in a person's shadow.

Zofis (Zatch Bell!) is an outcast demon who is constantly sneaking around in the shadows.
Add a photo to this gallery

SCP-017 - Shadow Person (SCP Orientation)
Add a photo to this gallery
Retrieved from "https://powerlisting.fandom.com/wiki/Shadow_Camouflage?oldid=1714644"
Community content is available under CC-BY-SA unless otherwise noted.