Use sheathed blades with extreme skill

The ability to be supernaturally proficient in the way of the sheathed blade. Variation of Weapon Proficiency.

The users are skilled with a bladed weapon to such a degree that they do not need the unsheathe the blade to cut or stab anything that they target. 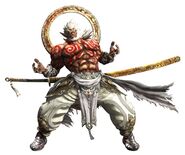 Though he does not use his blade, Wailing Dark, much on weaklings, Augus (Asura's Wrath) does use his sheathed blade to some degree.

Kagura Mikazuchi (Fairy Tail)
Add a photo to this gallery
Retrieved from "https://powerlisting.fandom.com/wiki/Sheathed_Blade_Proficiency?oldid=1421956"
Community content is available under CC-BY-SA unless otherwise noted.