Inuyasha's (InuYasha) Red Tessaiga can destroy strong demonic barriers, although there are some beyond it's cutting power.

Penetrate or destroy powerful defenses.
The ability to penetrate shield based abilities. Sub-power of Defense Break and Defense Manipulation.

User possesses the perfect counter ability for any shield based powers and are able to distort, penetrate, or completely destroy the target's shields/defenses whether they are elemental shields/exoskeletons, energy shields, force-fields, one's armor, aura, or even skin and leave them open for attack.

With the aid of his Berserker Armor, Guts (Berserk) gains a massive increase in his already immeasruable strength...

...granting him the power to crack the stronger than steel corundum skin of Grunbeld's apostle form. 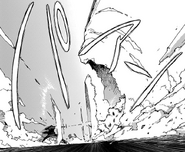 With his Rokuro Kabuto technique, Rentaro Satomi (Black Bullet) can unleash a vigorous punch capable of breaking the Repulsion Shield, a shield that earned the title of the strongest defense.

Ichigo Kurosaki's (Bleach) Bankai is so powerful, that simply releasing it caused Yukio's Chatroom dimensional barrier to split and shatter, which shouldn't be possible by normal means.

Inuyasha (InuYasha) can use the Diamond Tessaiga's Adamant Barrage technique to penetrate barriers that the Red Tessaiga cannot.

Kaguya Ōtsutsuki (Naruto) firing her "All-Killing Ash Bones" with such force that it pierced through Kakashi's "Susanoo".

Urashiki Ōtsutsuki (Naruto) penetrating through Gaara's sand shield using his Fishing Rod and even extract some of his chakra.

The Gáe Dearg (TYPE-MOON) is a spear that renders magical enhancements and projections useless by severing all ties with magical energy, such as Saber's armor.

The Three Legendary Knights (Yu-Gi-Oh!) destroy the Orichalcos Barrier, which is otherwise indestructible.

Although it is a Rank C technique, Hiei (Yu Yu Hakusho) was able to use the Sword of the Darkness Flame to slash and burn through Kuro Momotaro's Armor of the Wolf.

With his Dimension Sword, Kuwabara Kazuma (Yu Yu Hakusho) can cleave through virtually anything including space, dimensions, and even the Kekai that separates the Human World and Demon World.

Zatch Bell and Kiyo (Zatch Bell!) can use Zakeruga to fire a concentrated beam of lightning with the force to pierce armor.

The Blade Liger (Zoids) possesses the Laser Blades, powerful, razor sharp blades that can be further charged with laser technology in order to cut clean through the armor of enemy Zoids.

The Liger Zero (Zoids) has the Strike Laser Claw, a chargeable energy weapon that is powerful enough to tear through enemy armor to deal damage.
Add a photo to this gallery

Kei and Yumi (Ape Escape 3), when morphed as the Fantasy Knight, posses immense strength with their weapons that allows them to break the armor of monkeys and enemies.

Whenever Kei and Yumi morph into the Cyber Ace, they are able to project powerful laser that is able to blasts of the armor of the stronger monkeys and enemies.

Gabriel Belmont/Dracula (Castlevania: Lords of Shadow) can use his Chaos Claws to penetrate enemy shields and armor through brute force and heat.

When his Blades of Athena are infused with Thera's Bane, Kratos (God of War series) is able to destroy the shields and armors of various creatures, and even burn the armored skin of Thantos' beast form.

Whenever Jak (Jak and Daxter: The Precursor Legacy) is empowered with either Red or Yellow eco, he is able to easily dispatch of bone armor Lurkers and the shields of Lurker glacier troops in one hit.

Whenever he becomes Super Sonic, Sonic (Sonic The Hedgehog series) is powerful enough to break through powerful barriers.

After restoring the Power to Repel Evil to the Master Sword, Link (The Legend of Zelda: The Wind Waker) was able to destroy the magic barrier Ganondorf created around Hyrule Castle.

Using the Fused Shadow, Midna (The Legend of Zelda: Twilight Princess) was able to destroy the magic barrier Ganondorf placed around Hyrule Castle.

After acquiring the Master Sword Link (The Legend of Zelda: A Link Between Worlds) was able to destroy the barreir of dark magic that Yuga created around Hyrule Castle.

Gáe Dearg (TYPE-MOON)
Add a photo to this gallery

Empowered by Buffy's blood, the Master (Buffy the Vampire Slayer) pierces through the force field imprisoning him.

Voldemort (Harry Potter) uses the Elder Wand to penetrate the shield around Hogwarts.
Add a photo to this gallery

Renesmee Cullen (Twilight) can penetrate both mental and physical shields via touch.
Add a photo to this gallery
Retrieved from "https://powerlisting.fandom.com/wiki/Shield_Penetration?oldid=1431744"
Community content is available under CC-BY-SA unless otherwise noted.