Abe No Seimei (Japanese Mythology) can call the power of Shikigami.

Power to conjure entities called Shikigami. Not to be confused with Shinigami Physiology.

The user can call/conjure entities called Shikigami to assist them in a variety of ways, including for good fortune, protection, and curses. Their power is connected to the spiritual force of their master, and can possess or bewitch people, and cause bodily harm or death. They can take a variety of human or animal forms, but remain usually invisible or disguised to human eyes, although those with spiritual powers can normally perceive them. 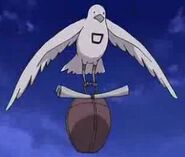 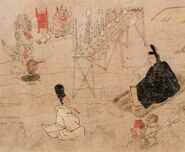 Yukari Yakumo (Touhou Project) can call her shikigami Ran Yakumo to assist her, and Ran (as a shikigami herself) can call Chen.

Meiko Rokudō (Ghost Sweeper Mikami) controls 12 Shikigami. Normally they are under her control, but whenever Meiko becomes distraught, her "pets" get out of control and destroy anything or anyone within their reach.
Add a photo to this gallery
Retrieved from "https://powerlisting.fandom.com/wiki/Shikigami_Conjuration?oldid=1331954"
Community content is available under CC-BY-SA unless otherwise noted.