Genryūsai Shigekuni Yamamoto (Bleach) is considered to be the strongest Soul Reaper in existence for the last millennium.

Use the traits of a Shinigami.

The power to use the abilities of a shinigami. Variation of Transcendent Physiology, Shinto Deity Physiology and Grim Reaper Physiology. Not to be confused with Shikigami Conjuration.

User with this ability either is or can transform into shinigami (death god), a "death spirit" of Japanese folklore who are responsible for seeing that a person dies at their appointed time and then guiding their spirit to be judged in the afterlife.

Shinigami are sometimes depicted as goblins or skeletal creatures who cause death and accidents, but more recent depictions of shinigami tend to be similar to western vampires, with them being portrayed as immortal, attractive people who wield a variety of unique powers. They will usually either cause death to sustain themselves, peacefully escort souls to the afterlife, slay demons and poltergeists who cause unnatural deaths, or be the result of unnatural deaths themselves. Or various combinations of the above.

The main differences between a Grim Reaper and shinigami are firstly that Grim Reaper is either a single individual or at least one of small group, while shinigami are generally both numerous and form a highly stratified and bureaucratic society of psychopomps and divine judges. The second difference is that shinigami as a whole tend to be weaker than a Grim Reaper: while some may reach impressive levels of power, average individuals are far below them.

Gō Okada (Alive: The Final Evolution) and his Shinigami, who slays anyone who breaks a promise with her master, including Okada himself if he reveals it.

Ichigo Kurosaki (Bleach) is a unique and perfectly balanced hybrid of Soul Reaper, Hollow, and Quincy.

Sōsuke Aizen (Bleach) is a very powerful renegade Soul Reaper, and even tried to transcend to a being beyond that.

Retsu "Yachiru" Unohana (Bleach) is considered to be the most diabolical criminal within Soul Society, as well as one of its greatest healers, and was one of the eldest Soul Reapers before her death.

Kenpachi Zaraki (Bleach) is considered to be a monstrously powerful Soul Reaper, stronger than Unohana, and even Yamamoto fears his potential.

Suì-Fēng (Bleach) is a Soul Reaper who specializes in assassinations.

Kisuke Urahara (Bleach) is an exiled Soul Reaper who specializes in scientific achievements, and assassinations.

Yoruichi Shihōin (Bleach) is Suì-Fēng's mentor and a member of one of the great Five Noble Families of Soul Society.

High Priest Ichibē Hyōsube (Bleach) is one of the oldest and most powerful Soul Reapers in existence, possessing the power of Definition Manipulation and is the head guard of the Soul King.

Rukia Kuchiki (Bleach) is a powerful Soul Reaper, and the one who awakened Ichigo's powers, who started out as just a regular, destitute Soul.

The Vizard (Bleach) are Soul Reapers who gained the abilities of Hollows that they were supposed to kill.

The Arrancar (Bleach) are basically Hollows (heartless spirits) who removed their masks and gained Soul Reaper-like powers and physiology.

Rei Ogami (Code:Breaker) taking on a Shinigami form when completely fused with Beelzebub.

A grouping of Shinigami (Death Note) who wields Death Notes to kill. They are bound by a specific set of rules.

The Shinigami King (Death Note) is the king of all the other Shinigami, and can even create new rules that they must follow. 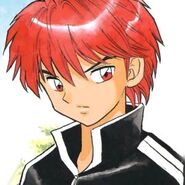 Rinne Rikudō (Kyōkai no Rinne) is part Shinigami whose responsibilities are ferrying souls between the land of the living and dead.

Tamako (Kyōkai no Rinne) is a full-blooded shinigami and Rinne's grandmother.

The Dead Demon Consuming Seal (Naruto) produces a Shinigami to rip out the target's soul and seal it within its stomach. 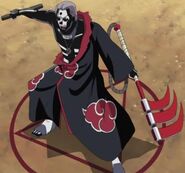 Hidan (Naruto) takes on a Shinigami form upon undertaking his ritualistic method of killing, a symbol of absolute death.

Shinigami-sama/Lord Death (Soul Eater) is one of the most powerful Shinigami known.

Death the Kid (Soul Eater) is the son of Lord Death, having been created by a piece of him.

Komachi Onozuka (Touhou Project) is a Shinigami, but she is a slacker as well.

The Card-Hunting Death God (Yu-Gi-Oh!) is a shinigami that lives up to its name.

Guardian Deathscythe (Yu-Gi-Oh!) is a Shinigami who gains power from her deceased comrades.

A Shinigami, Botan (Yu Yu Hakusho) leads the dead soul of Yusuke Urameshi to the Spirit World/Realm.
Add a photo to this gallery
Retrieved from "https://powerlisting.fandom.com/wiki/Shinigami_Physiology?oldid=1726692"
Community content is available under CC-BY-SA unless otherwise noted.