Fused Zamasu (Dragon Ball Super ) can use Divine Hammer to unleash shockwaves with punches from his mutated arm.

The user can produce powerful shockwaves via various means, including mentally or via physical action such as clapping, stomping, flicking, snapping, etc.,.

Darkseid (Batman: the Brave and the Bold)

Orianna (League of Legends) can use Command: Shockwave on The Ball unleash a powerful shockwave. 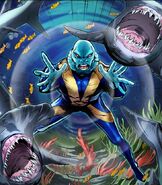 With his Shell Bullet: Ultimate, Kazuma (s-CRY-ed) can unleash devastating shockwaves from the force of his punches.
Add a photo to this gallery
Retrieved from "https://powerlisting.fandom.com/wiki/Shockwave_Generation?oldid=1523942"
Community content is available under CC-BY-SA unless otherwise noted.