The Reverse-Flash (DC Comics) can create a reverberating sonic boom with a finger snap.

Produce a shockwave just by finger snapping.
The ability to produce shockwaves by snapping their fingers. Technique of Enhanced Speed and Vibration Manipulation. Variation of Shockwave Flick and Shockwave Generation.

The user can produce powerful shockwaves by snapping their fingers.

...the inventor of the technique. 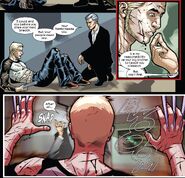 Ultimate Quicksilver (Marvel Comics) creating a sonic boom with a snap of his fingers.

Anos Voldigoad (Misfit of Demon King Academy)
Add a photo to this gallery
Retrieved from "https://powerlisting.fandom.com/wiki/Shockwave_Snap?oldid=1567481"
Community content is available under CC-BY-SA unless otherwise noted.