The power to wield a shovel, trowel or digging implement with high prowess. Variation of Improbable Weapon Proficiency

The user is able to use shovels, trowels or digging implements in combat as weapons and dig large holes in a short amount of time. 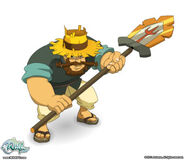 Alibert (Wakfu) as seen in game

Besides being able to manipulate plants with it, Jack (Marchen Awakens Romance) is proficient at using his Weapon ÄRM, Battle Scoop in close combat.

Rockhoof (My Little Pony: Friendship is Magic)
Add a photo to this gallery
Retrieved from "https://powerlisting.fandom.com/wiki/Shovel_Proficiency?oldid=1058255"
Community content is available under CC-BY-SA unless otherwise noted.