As long as any one of the primordial sins of man exist, HIM (The Powerpuff Girls) is able to feed off of them and gain fearsome power.

The power to gain strength from sin. Technique of Sin Manipulation. Variation of Affinity. Opposite of Virtue Empowerment.

Users become stronger, faster, more durable, etc. by sins, vices, etc. (Pride, Envy, Lust, Wrath, Gluttony, Sloth, Greed, etc) of oneself and others, possibly unlocking abilities related to the affinity and enhancing their existing powers. Some users may be able to draw sustenance from the sins or even slow or stop aging. 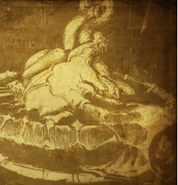 The Hearts of Sin (Diablo) can channel the power of sin into strengthening demons.

The Orb (Marchen Awakens Romance) was born from the collection of evil energy. As a result he is able to feed on the sin and errors of humanity to grow stronger and more evil.

The Curse Series (Rising of the Shield Hero) powers depends on the sin the Holy Heroes feel. In Naofumi case, Wrath...

... in Ren's Greed and Gluttony, causing him to become a bandit.
Add a photo to this gallery
Retrieved from "https://powerlisting.fandom.com/wiki/Sin_Empowerment?oldid=1322592"
Community content is available under CC-BY-SA unless otherwise noted.