Use the traits of siren.

The power to use the abilities of a siren. Variation of Mythical Avian Physiology.

User with this ability either is or can transform into a siren, creatures with the head of a female and the body of a bird. Traditionally, they lived on an island in the sea and used the irresistible charm of their song to lure mariners to their destruction on the rocks surrounding their island.

Sirens combine women and birds in various ways, in early Greek art, they were represented as birds with women's heads, bird feathers and scaly feet. Later, they were represented as female figures with the legs of birds, with or without wings, and playing a variety of musical instruments, especially harps. The tenth century Byzantine encyclopedia Suda says that from their chests up, they had the form of sparrows, below they were women, or, alternatively, that they were little birds with women's faces. Later Sirens were sometimes depicted as beautiful women, whose bodies, not only their voices, are seductive. 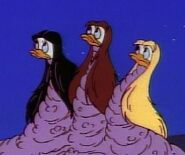 Serena (My Babysitters a Vampire) was a siren whose song made people to fight and hurt each other.
Add a photo to this gallery
Retrieved from "https://powerlisting.fandom.com/wiki/Siren_Physiology?oldid=1668800"
Community content is available under CC-BY-SA unless otherwise noted.