With a swing of her Bakuzan, Satsuki Kiryūin (Kill La Kill) releases a concussive force great enough to send Ryuko Matoi crashing in a tower.

The ability to project the slashing effect of bladed weapons. Sub-power of Extended Force. Not to be confused with Razor Wind.

The user can project the slashing effect of bladed weapons as if they were a projectile. The projection also applies each weapon's specific properties, possibly enhanced further by the user's own abilities: infusions (fire, electricity, ice, light, darkness, etc.), effects on touch (death, disintegration, petrification, absorption, corruption), and various others.

Rather than simply creating razor-sharp air currents via movement pressure, this actually acts as an extension of the blade, carrying its sharpness and properties to a range longer than the physical weapon.

Tsubame Fury (Kagijin) projecting his slash to cut through absolutely anything within his sight.

Meliodas (Nanatsu no Taizai) projecting a powerful slash from his sword.

Roronoa Zoro (One Piece) using his 36 Pound Cannon technique, a Flying Slash Attack that utilizes the very air pressure of a sword swing to cut an enemy down from a distance.

As the world's greatest swordsman, Dracule "Hawk-Eye" Mihawk's (One Piece) slashes have incredible range and power as he slices through the air itself with his Kokuto Kogetsu technique.

Trafalgar D. Water Law (One Piece) combining his swordplay skills with the powers of the Ope Ope no Mi to project a slash capable of slicing through a mountain.

Kazuma Kuwabara (Yu Yu Hakusho) projecting a slash with his Dimension Sword to cut down Mitarai at a distance.
Add a photo to this gallery 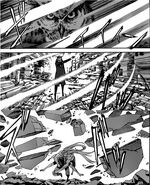 Owl's Eye (Area D) can emit vorpal shockwave's from his claws that travel at Mach speed.

Sectumsempra (Harry Potter) is a spell that projects invisible slashes based on the wand's movements.

Akua Shuzen (Rosario + Vampire) projecting a slash in the dimensional fabrics with her Hogetsu Jigen-to.

Akane Arima (Not Lives) using her Encounter skill to project slashes that cannot be avoided.

Mukuro's (Yu Yu Hakusho) right arm can slice through space, and she projects these cuts to create scars in the dimensional fabric.

Raizen (Yu Yu Hakusho) projecting a deep slash with a casual flick of his finger.
Add a photo to this gallery
Retrieved from "https://powerlisting.fandom.com/wiki/Slash_Projection?oldid=1732877"
Community content is available under CC-BY-SA unless otherwise noted.