Purio (Zatch Bell!) can issue all kinds of goo from his mouth through his spells.

The ability to release/use slime to various attacks. Sub-power of Slime Manipulation. Variation of Organic Attacks.

The user can release/use ooze, slime, and goo to attacks of various shapes and/or intensities, either projected, used as a part of melee attacks, etc. 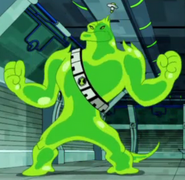 Goop (Ben 10)
Add a photo to this gallery
Retrieved from "https://powerlisting.fandom.com/wiki/Slime_Attacks?oldid=1377241"
Community content is available under CC-BY-SA unless otherwise noted.