The power to gain powers by hosting slime beings in one's body. Variation of Symbiosis and Biological Symbiosis. Not to be confused with Gestalt Form.

The user can gain powers by hosting slime beings in one's body. Their amorphous nature allows them to come in a variety of forms. They can live inside the host and be utilized according to the need. Often, the host will be able to manifest slime abilities like absorption, adhesion/cohesion, shapeshifting and even a more robust physique, due to the symbiote's influence.

As a living, possibly intelligent being, the slime symbiote will most likely do what it can to ensure the welfare of its host so the relationship can continue successfully. As with other forms of Symbiosis, it can come with a price. 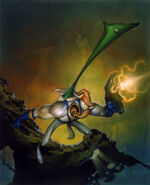 Earthworm Jim (Earthworm Jim) gains mobility thanks to Snot bonding to his Super Suit body.
Add a photo to this gallery
Retrieved from "https://powerlisting.fandom.com/wiki/Slime_Symbiosis?oldid=1507902"
Community content is available under CC-BY-SA unless otherwise noted.