The power to fall slowly.

User can fall at a much slower speed, much like a feather float downward as if they had a parachute, which is much useful for avoiding serious injury. 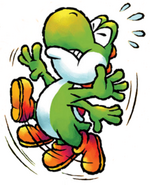 Cosmo (Sonic X)
Add a photo to this gallery
Retrieved from "https://powerlisting.fandom.com/wiki/Slow_Descent?oldid=1514502"
Community content is available under CC-BY-SA unless otherwise noted.