User can create, shape and manipulate smoke, collection of airborne solid and liquid particulates and gases emitted when a material undergoes combustion or pyrolysis, together with the quantity of air that is entrained or otherwise mixed into the mass. It is commonly an unwanted by-product of fires, with smoke inhalation being the primary cause of death in victims of indoor fires. The smoke kills by a combination of thermal damage, poisoning and pulmonary irritation caused by carbon monoxide, hydrogen cyanide and other combustion products. 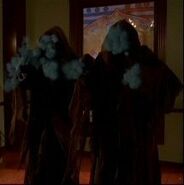 Delsin Rowe (InFamous: Second Son) is capable of absorbing smoke from the environment.

Delsin Rowe (InFamous: Second Son) is capable of using Smoke in order to glide in the air.