Users can control various snakes. They control them to do their bidding, like helping them during situations, using them against foes, using them to see locations and get information about a particular place, using them for battle, and using them for spying on others. User can also understand or communicate with them, hence creating and strengthening friendships. 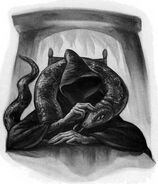 Lord Voldemort (Harry Potter) is a Parselmouth, being able to communicate with snakes, and they obey his every order, whether his faithful servant Nagini or the Serpent of Slytherin (a basilisk).

Lord Voldemort (Harry Potter) has great command over Nagini, even for a Parselmouth, due to a part of his soul within her, as he order her to kill Snape.

Kabuto (Naruto) partook of Orochimaru's DNA, himself assuming similar snakelike qualities and abilities, among others the snake summoning.

Selina (Winx Club) summoning a green-energy snake.
Add a photo to this gallery
Retrieved from "https://powerlisting.fandom.com/wiki/Snake_Manipulation?oldid=846263"
Community content is available under CC-BY-SA unless otherwise noted.