User can create, shape and manipulate snow, precipitation in the form of flakes of crystalline water ice. Because snow is composed of small ice particles, it is a granular material with an open and therefore soft structure, unless subjected to external pressure.

Snowflakes come in a variety of sizes and shapes, with types that fall in the form of a ball due to melting and refreezing, rather than a flake, are known as hail, ice pellets or snow grains.

Kopaka (Bionicle) using his sword to summon a blizzard.

Elsa's (Frozen) magic allows her to manipulate snow and ice. 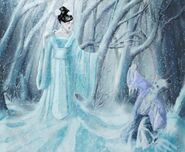 Nieves (Los Protegidos) Can generate snow from her hands.

Among his magical powers Santa Claus (Marvel) can generate snow.

After eating the Yuki Yuki No Mi, Monet (One Piece) gained the ability to create and manipulate snow.

Snow Miser (The Year Without A Santa Claus) 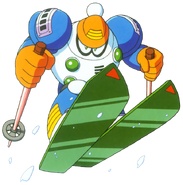 Blizzard Man (Mega Man 6)
Add a photo to this gallery
Retrieved from "https://powerlisting.fandom.com/wiki/Snow_Manipulation?oldid=1663340"
Community content is available under CC-BY-SA unless otherwise noted.