Eating the Yuki Yuki no Mi gave Monet (One Piece) the power to turn into snow at will.

User is made up of or can transform their body completely into snow. Users' transformed form is anatomically identical to their normal form, aside of being made of snow, in which case it contains all to organs and is somewhat vulnerable to attacks. Alternately the user can transform into homogeneous matter, without any part of their form being more important than the other.

While snow lacks the raw power and durability of ice, it more than makes up with flexibility. User can manipulate their form with ease rivaling Water Mimicry, being able to shift from solid to snow-cloud, form weapons or scatter themselves over vast areas. 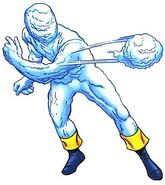 In his early years Robert Drake/Iceman (Marvel Comics) took the form of snowman before his current appearance.
Add a photo to this gallery
Retrieved from "https://powerlisting.fandom.com/wiki/Snow_Mimicry?oldid=1533996"
Community content is available under CC-BY-SA unless otherwise noted.