Mr. Satan (Dragon Ball series) has considerable social influence, at one point persuading the entire population of Earth to contribute to the Spirit Bomb that killed Kid Buu.

The power to socially influence others. Sub-power of Social Interplay Manipulation and Psychological Intuition.

The user can socially influence other characters. This has several uses in the form of manipulation, whether it be to manipulate how an opponent fights, thinks, or to get info from them that the user would want or need. This can be used in a number of ways via their looks, natural charm, or their way of speaking.

While it does not seem combat applicable, this ability can be used in many ways that can affect a fight indirectly, including buying time, obtaining information that could be important, or manipulating how a person might approach a situation. 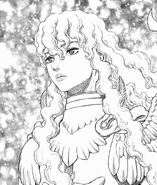 Even before his rebirth as Femto, Griffith (Berserk) possessed incredible charisma and social skills, allowing him to easily influence both humans and demons alike to follow his lead and support his dream.

DIO Brando (JoJo's Bizarre Adventure) can easily influence people from all walks of life into being his allies and seeing him as a god.

Medaka Kurokami (Medaka Box)
Add a photo to this gallery
Retrieved from "https://powerlisting.fandom.com/wiki/Social_Influencing?oldid=1421262"
Community content is available under CC-BY-SA unless otherwise noted.