An earthbender (Avatar: The Last Airbender) creating a construct out of the soil.

The ability to manipulate dirt/soil. Variation of Earth Manipulation.

User can create, shape and manipulate dirt/soil, natural body consisting of layers (soil horizons) that are primarily composed of minerals, mixed with at least some organic matter. In horticulture, the term 'soil' is defined as the layer that contains organic material that influences and has been influenced by plant roots. 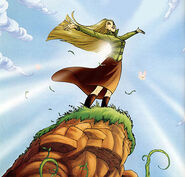 Cornelia Hale (W.I.T.C.H.)
Add a photo to this gallery
Retrieved from "https://powerlisting.fandom.com/wiki/Soil_Manipulation?oldid=1507973"
Community content is available under CC-BY-SA unless otherwise noted.