Kanon Mitachi (Alive: The Final Evolution) can create sound waves to cause metal to ignite and detonate.

Expand sound waves in an object.

The ability to expand sound waves in an object until it explodes. Sub-power of Sound Attacks. Variation of Combustion Inducement. 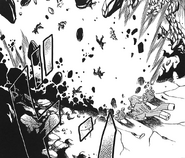 Exploud and Loudred (Pokemon) using Hyper Voice to such intense effects that it causes the entire area to detonate from the sound waves.

Kanade Kamiya (Rosario + Vampire Season II) using his second form to boost his song's strength from a small noise spark to an explosive roar, as well as super heating the air around.

Theresa Cassidy/Siryn (Marvel) can generate wide range of sonic frequencies and volume of sound ranging up to at least 140 decibels.