Use the sound waves to cut objects.

The ability to use the sound waves to slice objects. Sub-power of Sound Attacks and Vibration Emission. Variation of Elemental Cutting.

The user can project sound waves in a way that allows them to cut through matter from a distance. By sending a high-frequency sound wave, a razor blade of controllable sharpness, proportional to the frequency of the vibrations is created. Although this attack does usually slashing damage, some users are able to focus it into single piercing stab like immaterial bullet.

Setsuki (Black Cat) using Wail of Fire to generate a concentrated sound wave in the form of a beam that can slice through stone with ease. 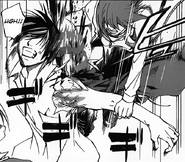 Yūki Tenpōin (Code:Breaker) using Sonic Sew to create a high-frequency sonic blade from his hand to pierce through flesh with ease.

Zaku Abumi (Naruto) using Decapitating Airwaves to fire supersonic blasts capable of slicing through stone.
Add a photo to this gallery
Retrieved from "https://powerlisting.fandom.com/wiki/Sonic_Cutter?oldid=1099212"
Community content is available under CC-BY-SA unless otherwise noted.