The ability to create tools, weapons, armor, and even appendages out of sound. Sub-power of Sound Manipulation. Variation of Elemental Constructs.

Users can turn sound into tools, objects, weapons and other items, create semi-living constructs and/or create structures/buildings of varying permanence. Users who have mastered this ability can use it for almost any situation, creating anything they need.

Koga's Golbat (Pokemon Adventures) solidifying its Supersonic waves into a mirror for clairvoyance. 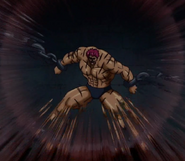 Zebra (Toriko) can use sound for walls and life jackets, among many other constructs. 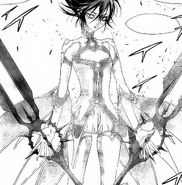 Seth Nightlord (Trinity Blood) can solidify sound waves with her blood to give it a medium, similar to airwaves.

Whismur, Loudred, Exploud (Pokemon)
Add a photo to this gallery
Retrieved from "https://powerlisting.fandom.com/wiki/Sonokinetic_Constructs?oldid=1508032"
Community content is available under CC-BY-SA unless otherwise noted.