Gain a unique weapon that is soul bound to the user.
The power to gain weapons that are unique to users and bound to their souls. Spiritual version of Weapon Transformation. Variation of Soul-Bound Power.

User is able to build, summon or create a weapon(s) that is an extension, manifestation, and/or part of their soul. Each weapon is likely to have their own abilities and powers they grant to the user, but these depend on which part of the user's soul each weapon represents as well as the abilities/power they already have.

Note that since the weapon(s) is part of a soul, it is likely to have some level of sentience as well as their own interests and goals that might not be similar to that of the user. This also means that the user can summon the weapon(s) from anywhere at anytime, even if it is faraway at some unknown location, as the two possess a link that allows one to call upon the other, so losing the weapon is never an issue. 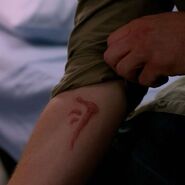 Devices such as Stella's Laevateinn (Rakudai Kishi no Cavalry) are the manifestation of a Blazer's soul.
Add a photo to this gallery
Retrieved from "https://powerlisting.fandom.com/wiki/Soul-Bound_Weapon?oldid=1401061"
Community content is available under CC-BY-SA unless otherwise noted.