A Guardian (Charmed) taking the soul of his victim.

"Your soul is mine!"
― Shang Tsung (Mortal Kombat)

"You are changed. Your blood-thirst is replaced by a deeper need - you have become a devourer of souls. To sustain your strength, you must hunt the lost spirits of the Underworld, and consume the souls of your enemies."
― The Elder God to Raziel (Legacy of Kain)

The power to absorb souls and utilize them in some way. Sub-power of Soul Manipulation. Variation of Absorption.

The user can absorb souls, while removing them from the source, into their body and use it in various ways, gaining some form of advantage, either by enhancing themselves, gaining the drained power, using it as a power source, etc., either temporarily or permanently.

Common advantages include adding the target's skills and abilities to users or using the absorbed souls to augment the user's own powers.

See Also: Your Soul Is Mine.

Aaroniero Arruruerie (Bleach) can devour the souls of other hollows, adding their power to his own.

Muramasa (Bleach) can absorb the souls of Hollows.

Yin/Izanami (Darker than Black) after awakening she gained the ability to to kill contractors by merely drawing a blue essence from them, which is possibly their soul.

Franmalth (Fairy Tail) uses his Absorption Curse to absorb souls of others and magic to use their powers of use their forms. 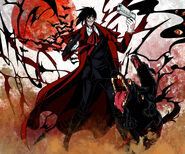 Alucard (Hellsing) can absorb the souls of others by drinking their blood.

Kanna (InuYasha) can steal the souls of anyone reflected in her mirror.

Kikyo (InuYasha) must absorb the souls of others to keep herself alive.

…and stored in a semblance of poker chips.

With the Gedo Statue of the Outer Path as a catalyst, Nagato/Pain (Naruto) could use Phantom Dragon Nine Seals to remove souls on an immense scale.

The Human Path/Ningendo (Naruto) grants a Rinnegan user the ability to read the mind of any target and yanking the soul out of the body, killing them. 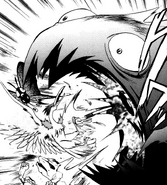 Brynhildr (Shinmai Maou no Testament) formerly a Valkyrie who once collected for the Gods before she have to be sealed herself and still maintains that power even as a sword.

Hadou/Hegemony Gods (Shinza Banshou series) are capable of increasing their power with souls and can use the absorbed souls for attacks.

Orb of Baast (Yu Yu Hakusho) extract and contain the souls of any human it comes across.

Marceline (Adventure Time) stated the only power her demon heritage granted her was the ability to suck souls, like her father. This allowed her to gain the specific abilities of vampires she had killed. 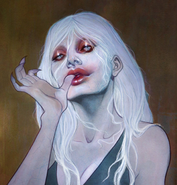 Liss Hubble (Angel: After the Fall) 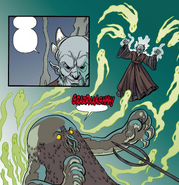 D'Hoffryn (Buffy the Vampire Slayer) absorbs the Soul Glutton of all his souls.

The Soul Gem (Marvel Comics) can suck the souls of the living. 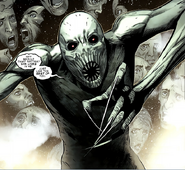 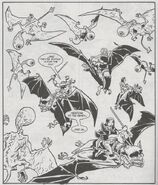 Opticarns (Teenage Mutant Ninja Turtles) can steal the souls of anyone who directly meets their stare.

Saya Terumi (Bloodedge Experience) possesses the Drive Soul Eater, which allows her to absorb the souls of others upon physical contact 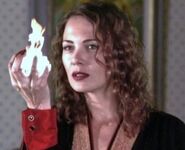 Charon (Charmed), a Soul Collector, can steal the souls of others, preferably good witches, and transport said souls to Hell.

Dementors (Harry Potter) can drain the souls of humans via the "Dementor's Kiss."

Alexia (Los Protegidos) it can absorb the soul of the people

Freddy Krueger (A Nightmare on Elm Street) absorbs the soul of his victims to become more powerful...

... the absorbed souls appearing as screaming faces embedded in his chest.

After absorbing the 30-40 million souls of Purgatory, Castiel (Supernatural) was endowed with god-like power.

When the souls of the Migar Prisoners (Tracker) were brought to Earth, they took over human 'hosts' - absorbing the human souls into their own to ensure their survival - but killed the human inside in the process.

Cole (Tracker) is able to use his Collector to capture and entrap the souls of the Migar prisoners.

Ragna the Bloodedge (Blazblue) possesses the Drive Soul Eater, which allows him to absorb the souls of others upon physical contact. 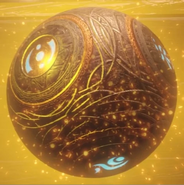 The Summoning Key (Call of Duty: Black Ops III) has the power to preserve souls, but it can only be done after the moment of death.

Shadow Fiend/Nevermore (Dota 2)is able to collect souls from enemies to get stronger Necromastery.

Shang Tsung (Mortal Kombat) has the power to steal the souls of anyone he defeats.

The Dovahkiin/Dragonborn (Skyrim) can absorb the souls of dragons, gaining their knowledge and powers

Necalli (Street Fighter) feeds on the souls of strong warriors.

Amduscias (Valkyrie Crusade) is a demon musician that steals the souls of mortals captivated by her recitals.
Français Português do Brasil
Community content is available under CC-BY-SA unless otherwise noted.
Advertisement