Grey Knights' (Warhammer 40000) souls are unwavering, not a single one having been tainted in ten thousands years of constant battles against the forces of Chaos.

Be immune to soul manipulation.

"Yea. I sold my soul."
"Hope you got something good for it."
"As a matter of fact, I got nothing for it."
"Well that's a really bad deal if you ask me."
"Doesn't really matter, though. Can't sell your soul anyway."
"Oh, really? Why do you say that?"
"Because it doesn't really belong to you in the first place. No way, no how."
"So who does it belong to?"
"It belongs to God. That universal spirit that animates and binds all things in existence."
― Elliot Richards and the Mysterious Cellmate/God (Bedazzled)

The power to be immune to all soul manipulation-based powers.

The user is immune to all soul-based powers, meaning their souls cannot be manipulated in any way, including being absorbed, destroyed, trapped/sealed, or converted into another type of soul.

This perfect defense may be the result of advanced supernatural protection, an extremely powerful soul, or something even more radical.

Crota's (Destiny) Oversoul allows him to keep his soul safe from any harm and thus makes Crota resilient to death. 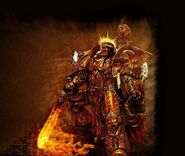 The God-Emperor of Mankind (Warhammer 40000) has a soul so powerful even the Chaos Gods cannot affect it.
Add a photo to this gallery
Retrieved from "https://powerlisting.fandom.com/wiki/Soul_Anchoring?oldid=1380196"
Community content is available under CC-BY-SA unless otherwise noted.