The power to condense soul energy/spiritual force into a tangible form. Sub-power of Soul Manipulation and Spiritual Force Manipulation. Variation of Life-Force Solidification.

User can solidify or give solid-like properties to soul energy/spiritual force with the level of solidity going from loose jelly to metal-like hardness or beyond.

Arrancar Coyote Starrk (Bleach) wielding Colmillo, made from his own Spiritual Power.

Traditionalist Quincy (Bleach) wielding Heilig Bogen, made from Spiritual Energy from their surroundings.

Ichigo Kurosaki's Zangetsu (Bleach), like all true Zanpakutō, is a weapon formed from it's wielder's soul.

Illyana Rasputina/Magic (Marvel Comics) created her Soulsword from her own spiritual energy. 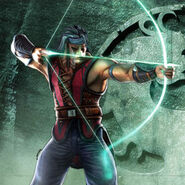 Nightwolf (Mortal Kombat)
Add a photo to this gallery
Retrieved from "https://powerlisting.fandom.com/wiki/Soul_Energy_Solidification?oldid=1341076"
Community content is available under CC-BY-SA unless otherwise noted.