Toru Kokonoe (Absolute Duo) can create a shield made from his soul via his "Blaze".

Create shields made of souls/spirits.

The ability to project powerful shields/barriers of souls or spiritual energy. Sub-power of Soul Manipulation.

User is able to create a shield, wall or a field to protect themselves by using their own or the souls of others.

Lie Ren (RWBY) manifests his soul as an Aura, using it as a shield to defend against a King Taijitu.

…through his powers of shaman he can create a spiritual shield 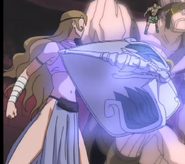 Mayan (Shaman King) can create several versions of the spiritual shield through his "S.O". 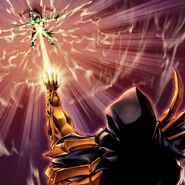 Gagagigo (Yu-Gi-Oh! TCG) using Spirit Barrier to protect one of Marauding Captain’s men from Invader of Darkness’ attack.
Add a photo to this gallery
Retrieved from "https://powerlisting.fandom.com/wiki/Soul_Shield?oldid=1508065"
Community content is available under CC-BY-SA unless otherwise noted.