Even in Heaven, they're soulmates.

Have a connection with one's soulmate.

"Two lonely bats crashed in the night... They felt a Zing, love at first sight. They knew right then, they would be husband and wife. For a Zing only happens once in your life. Your Zing will come, my love... cherish it."
― Martha Lubode Dracula (Hotel Transylvania)

"Love means their happiness is your happiness. Their sorrow is your sorrow."
― Unnamed Bride (Comet Lucifer)

"I will search through a thousand worlds, through ten thousand lifetimes until I find you."
― Kai (47 Ronin)

"Death cannot stop true love. All it can do is delay it for a while."
― Westley (The Princess Bride)

"I'll skip till the end of eternity. Its my way of being close to her..."
― Skips describing his immortality and connection to Mona (Regular Show)

The power to have a connection with one's soulmate.

The user is connected, linked, and bonded with their soulmates, with whom one has a feeling of deep or natural affinity all of which involves similarity, love, romance, platonic relationships, comfort, intimacy, sexuality, sexual activity, spirituality, compatibility and trust.

They know who their soulmate/s is/are, can empathize and harmonize with said soulmate/s, lack any struggle in expressing their feelings for them, and share many, if not some characteristics in common with them.

The user and their soulmate/s, by nature, are compassionate, caring, loving, and sympathetic toward one another, would get along quite well with each other, naturally share romantic and/or platonic feelings of love for one another, and are meant for each other as a couple, bestest of friends, and love the other with all their heart, all their soul, all their mind, and all their strength. 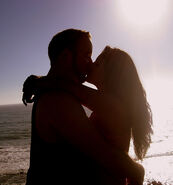 Love is an all conquering force no one can deny.

Zeref Dragneel (Fairy Tail) shared a kiss with Mavis Vermillion that is the highest level of the Contradicition Curse, because they loved each other it was even able to take away an immortal life.

Shiro Emiya (Fate/Stay Night) spent all of his life continually searching for Arturia Pendragon, while she waited forever to be with him again, before they were finally reunited in the Everdistant Utopia, Avalon, showing that their souls were forever connected and always would be.

Mio Takamiya (Date A Live) is deeply in love with Shinji Takamiya and will sacrifice anything to bring him back, which during Ain Soph Shinji incarnation who is now Shido Itsuka and Reine Murasame who is Mio doppelganger had an enjoyable and happy double date together.

Charlie and Claire (Lost) despite their flaws they would always love each other. Even when they died, they were reunited.

Rey and Ben Solo (Star Wars) form a Force dyad, two halves of one in the Force, and the equivalent of being soulmates in the Force. This bond unites them as fate, allowing them to understand each other and they eventually fall in love, despite being on opposite sides of the war and the Force.

As Emmet found the piece of the resistance and saved the world from Lord Business that brought him and Lucy together.

Cinderella's glass slipper is what brought her True Love Prince Henry together.

Princess Aurora & Prince Phillip's first encounter was a sign that they were meant to be together.

It was Ariel's dream of being part of the human world that brought her & Prince Eric together. 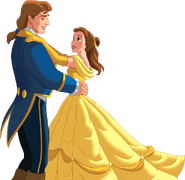 After days of living with the beast (Prince Adam), Belle finally looked into his heart, broke the spell & found the man of her dreams.

It was their encounter on the streets of Agrabah that brought Aladdin & Jasmine together. 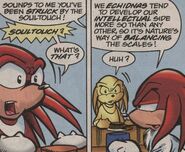 Raven and Beast Boy (DC Comics) loved each other so much that they were only happy when they were together.

The 911 Call That Will Change His Life - Key & Peele
Community content is available under CC-BY-SA unless otherwise noted.
Advertisement