Users can create, shape and manipulate sound, a periodic disturbance of a medium (air, ground, water, etc) that radiates outward linearly in the form of a pressure wave. The effect these waves upon the ear is perceived as sound. From the point of view of physics, sound is considered to be the waves of vibratory motion themselves, whether or not they are heard by the human ear.

User can mimic, intensify, hush, and distort, as well warp, strengthen, echo, speed up, and slow down sound, using it as a powerful physical force and high-speed movement. At low frequencies, sound can be potentially fatal to living beings by causing internal damage, while high frequencies cannot be heard by normal humans but can be used for sonar-like effects. Since sound vibrations can travel through the air, ground, water and any form of medium, defense by using physical barriers is difficult. The vibrations can also affect at a molecular level. In essence, sound is an invisible, deadly weapon and a versatile tool. A common use of this ability is Sonic Scream.

Affect those who hear:

Yuuki Tenpouin (Code: Breaker) can manipulate sound waves, such as using them to for combat...

...and with the most extreme usage of his sound, Scarlet Phoneme...

...which covers his entire body with an extremely dense shell of sound waves to rejuvenate and shield his body from any and all damage, as well as amplifying his strength and speed to max.

Dosu Kinuta (Naruto) using his Resonating Echo Drill to absorb sound waves into his gauntlet and manipulate and redirect it with his chakra.

Zaku Abumi (Naruto) controlling the air pressure and sound wave ratio to fire off his supersonic blasts of Decapitating Airwaves...

Zebra (Toriko) possesses extremely destructive sound-based powers done via his voice, capable of doing things like using his Sound Bazooka to perform a monstrous roar to kill the execution beasts...

... launching a missile construct of sound against the Magma Tortoise, with nuclear-like explosive results...

...manipulate the sound of his voice to create a thunderstorm raining down bolts on the Salamander Sphinx...

...that rapidly fire solid bullets of sound against the Salamander Sphinx, as if a machine gun was being fired...

...create a meteor-like construct that crashes into the opponent with a loud bright flash...

... performing his Voice Meteor Shower technique, visually decimating the foe with the sound of meteors crashing...

...to using his Voice Eruption technique, vocally discharging the sound of his voice as a mass of burning flames to incinerate meteors.

Through the power of the Oto Oto No Mi, Scratchmen Apoo (One Piece) can convert his limbs into musical instruments, which he can play to perform Tatakau Music/Fighting Combat, damaging his opponents.

Kyoka Jiro (My Hero Academia) using her Quirk, Earphone Jack to sense and manipulate any noise.

Ultimate Echo Echo (Ben 10) can produce and control airwaves, sound waves that can be used and exist even in the vacuum of space.

Walter Shreeve/Shriek (Batman Beyond/DCAU) is able to use his sound suit to control and blast sound vibrations that have deadly effects to amplifying sound to blasting it over a specific area or even nullifying sound, allowing him to be completely soundless and muting anything in the area he is in. 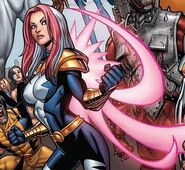 Songbird (Marvel Comics) is able to manipulate sound energy, as well as solidifying it into constructs.

Dark Danny (Danny Phantom) and his younger self Danny Fenton/Phantom is able to manipulate their vocal cords and generate an extremely powerful sonic scream of pure sound which they named the Ghostly Wail.

Unlike other EVOS, Circe (Generator Rex) control her nanites, allowing her to freely manipulate her mouth into a large fanged, grotesque fleshy tube that can emit a hypersonic blast of concussive force strong enough to shatter objects as tough as metal. 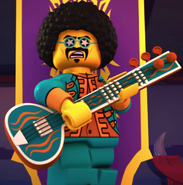 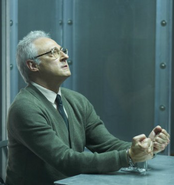 ...and uses the sound of incoming cannon fire to protect herself.

Kohrak-Kal (Bionicle) can manipulate sonic waves. It was defeated by its own sonic vibrations.

Lisa Simpson (The Simpson Game) defeating dolphins with a saxophone.

Everyone Must Know This Before it is Deleted (2021)-2
Português do Brasil
Community content is available under CC-BY-SA unless otherwise noted.
Advertisement