Having complete control over space-time, Herrscher of the Void (Honkai Impact 3rd) can distort it to her will.

The ability to distort the space-time continuum. Combination of Space-Time Manipulation and Distortion Manipulation.

The user can create distortions within the space-time continuum, the very fabrics of which the world exists in, allowing them to achieve a plethora of effects throughout time and space.

Killy (Blame!) using his Gravitational Beam Emitter to fire deadly beams of gravity at such intensities that it heavily distorts space-time.

Hachigen Ushōda (Bleach) utilizing his Time-Space Regression to distort space-time within the confines of his barrier.

David Clinton (DC Comics) using his Time Belt to disrupt space and time, eventually causing every timeline to collapse, save the Beginning of Time.

The Summoning Technique (Naruto) distorts space-time to bring forth a creature from one place to another instantaneously.

Kakashi Hatake (Naruto) distorting space-time with his Kamui to remotely teleport Deidara's arm to another location.

Minato Namikaze (Naruto) using his Space-Time Barrier to create a distortion within the continuum that warped away Kurama's attack.

When Chaos Control (Sonic the Hedgehog) is used at great intensities, it can distort the space-time fabrics to create time-traveling dimensional rifts.

Solaris (Sonic the Hedgehog) distorting space-time to create the Eyes of Solaris, deadly rifts that send victims into oblivion.

The Time Eater (Sonic the Hedgehog) creating damaging tears in space-time known as Time Holes, which allows travel through space and time. 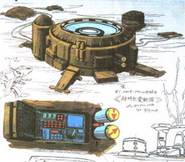 The Space/Time Oscillation Bomb (Super Dimension Century Orguss) caused dimensional damage on such a level that it shattered all of Earth's realities.

The Ventriloquist of the Dead (Yu-Gi-Oh!) using Attack Nullification to create space-time vortexes that absorbs attacks into the oblivion.

Agreas (Valkyrie Crusade) is the space-time demon, and can warp space-time.

Mukuro Hoshimiya (Date A Live) can distort the fabrics of space-time with her Angel to create wormholes.

Ryu (Ninja Gaiden) creates fluctuations of Space-Time with Piercing Void Ninpo.
Add a photo to this gallery
Retrieved from "https://powerlisting.fandom.com/wiki/Space-Time_Distortion?oldid=1728223"
Community content is available under CC-BY-SA unless otherwise noted.