The ability to deplete space. Sub-power of Spatial Manipulation and Destruction. Opposite to Space Generation.

Yuichi Hirose's (Alive: The Final Evolution) Void opens up a hole in space, deleting any and all within.
Trompete.png
Lille Barro (Bleach) using his Trompete to create a spatial blast that erased a large portion of Wahrwelt. 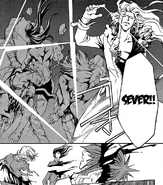 The One Being Sought (Code:Breaker) removing a sliver of space to sever the spatial connection of everything he targets.
The Hand Erasing Space.gif
The Hand (Jojo's Bizarre Adventures) erasing space with his right hand, and anything within.

Keith Green (Project ARMS) removing slivers of space and making them simply disappear from existence.
Creatingtimeholes.png
Time Eater (Sonic the Hedgehog) destroys space of whatever timeline it opens its Time Hoes in.

Kojō Akatsuki's (Strike the Blood) 3rd familiar, Al-Maisan Mercury eating through space and void, effectively destroying any matter.
The Void.png
The Void (Super Paper Mario) is an inter-dimensional hole that will destroy all worlds, devouring the space and leaving a while realm of nothingness.

A Subspace Bomb (Super Smash Bros. Brawl) detonating removes the surrounding area from the world and leaves behind a dark void.
Add a photo to this gallery
Retrieved from "https://powerlisting.fandom.com/wiki/Space_Depletion?oldid=1092977"
Community content is available under CC-BY-SA unless otherwise noted.