All Hadou/Gudou Gods (Dies Irae) exist beyond the concept of space and time.

Exist beyond the concept of space and time.

User exists beyond the concepts of time and space and as such are immune to anything that would affect or harm them. If time should stop then they would not be affected, if reality would change, they would remember both the previous and have knowledge of differences from the old to the new. If the area around the user explodes or the planet which they are on vanish or does not exist any more the user is not affected since they do not exist inside space. 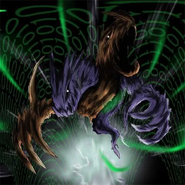 Demise (The Legend of Zelda) may have died millennia ago, but his hatred transcended time and space by being eternally reincarnated as Ganondorf.

Ganondorf (The Legend of Zelda) is the incarnation of Demise's hatred, his curse forever transcending time and space against the hero and the princess who inherited the Goddess Hylia's blood.
Community content is available under CC-BY-SA unless otherwise noted.