Palkia (Pokémon) distorting space to the point of flipping it upside down completely.

The ability to distort space. Sub-power of Space-Time Distortion. Combination of Spatial Manipulation and Distortion Manipulation.

The user can create distortions within space, causing any physical matter within to bend according to the distortion.

Echidna Parass (Black Cat) creating a distortion in space in order to link two points of space with a Gate.

Gillians (Bleach) can use Kūmon to create a spatial distortion in the human world in order to exit the Garganta subspace passageway.

Grimmjow Jaegerjaquez (Bleach) using the Gran Rey Cero, a technique of such power that it disturbs the fabrics of space as it travels.

BHB's Gravity Generator (Bomberman 64: The Second Attack) distorts space via a black hole, which generates dark matter and energy for devastation and usage.

The One Being Sought (Code:Breaker) imbuing his fist with space, causing a spatial distortion upon impact that can shatter bedrock.

... to distort space, causing everything within to collapse into the focal point and into the other dimension.

Obito Uchiha (Naruto) using Kamui to distort space, causing everything within to collapse into the focal point of his right eye and into the other dimension...

Might Guy (Naruto) using Night Guy, his ultimate technique of such intense power that it distorts the space of his immediate vicinity, causing unstoppable and lethal damage.

Palkia (Pokemon) causing a distortion in space simply by breathing, being able to tear apart the subspace as well. 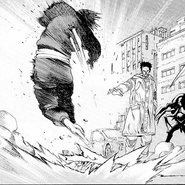 James Huang (Project ARMS) causing a distortion in space by pulling on it, creating destructive shock waves or cutting damage.

Shadow the Hedgehog (Sonic the Hedgehog) using Chaos Control to distort either space or time, or even both simultaneously.

The Subspace Gunship (Super Smash Bros. Brawl) emerging from a spatial distortion, and firing a blast that can infinitely rend space, teleporting everything it hits to subspace.

Mukuro (Yu Yu Hakusho) using her Space-Cutting Hand to create slicing distortions within space, inflicting slashing damage to anything caught by them.

Caladbolg's (TYPE-MOON) spatial distortions after-effect destroyed Caster's defense even though it wasn't directed at her.

SCP-1351 - Moebius Cave’s (SCP Foundation) anomalies inside not only cause the cave to ignore the rules of gravity, but they also happen to twist and warp the floor and as well as the ceiling and creating its own walls and gravitational fields, which earns this cave its name.

Palkia and Dialga (Pokemon Adventures Diamond and Pearl Platinum) fight with each other. Cyrus explains that their conflict will distort all of time and space.
Add a photo to this gallery
Retrieved from "https://powerlisting.fandom.com/wiki/Spatial_Distortion?oldid=1564432"
Community content is available under CC-BY-SA unless otherwise noted.