The user is able to utilize space manipulation with their physical combat, allowing them to warp or teleport their attacks using portals and shift the battlefield to their advantage.

Hachigen Ushoda (Bleach) can use space-time barrier spells to teleport dangerous attacks such as Baraggan's Respira right inside his body.

The One Being Sought (Code:Breaker) manipulating space for both offense and defense.

Mukuro Hoshimiya (Date A Live) can use space-time distortion to create portals to absorb all the DEM's artillery attacks and teleport it back at them, singlehandedly wiping out an army of Bandersnatch robots and DEM airships.

Kakashi Hatake (Naruto) using Kamui Shuriken, which warps anything they cut into the other dimension...

...and Kamui Raikiri to phase through Kaguya while his enhanced Raikiri cuts through her physically.

Palkia (Pokemon) using Spacial Rend to slice through space to injure its opponents.

Trafalgar D. Water Law (One Piece) combines his Ope Ope no Mi's spatial abilities with his powerful style of swordsmanship...

...Takt, a form of tactile telekinesis...

...Spatial Infusion, which is powerful enough to not only cut through Haki enhanced defenses...

...but also an entire mountain with Spatial Slicing...

...and his Radio Kinfe, an enhanced version of his spatial amputation. 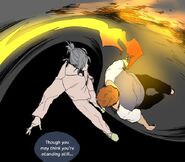 Lessa (LESSA)
Add a photo to this gallery
Retrieved from "https://powerlisting.fandom.com/wiki/Spatiokinetic_Combat?oldid=1516940"
Community content is available under CC-BY-SA unless otherwise noted.