Task Force 141 is one of the two premier special operations forces in the Call Of Duty universe.

"Bucky did the things I couldn't. I was the icon. I wore the flag... but while I was giving speeches to the troops in the trenches... he was doing what he'd been trained to do...and he was highly trained. He wouldn't have been out with us if he wasn't."
― Steve Rogers talking about Bucky's true role during WWII (Marvel Comics)

"If you will going down this road, the LAPD, the FBI, the CIA… They are all gonna come for you, They will find you, and will stop you.
Good luck."
― Bryan Mills, Taken 3

The ability to innately or through training have special operations skills and maintain them without the need of further training.

The ability may be from advanced training, mental programming or even supernatural/superhuman powers. Combined with high intellect and a high level of physical ability, they can create completely new possibly unbeatable methods of special operations. Important that comes from special operations are such as Reconnaissance and surveillance in hostile environments, Training and development of other states' military and security forces, Offensive action, Sabotage and demolition and Hostage rescue.

Hayley Smith (American Dad!) is highly trained sleeper agent from Project Daycare, and when a malfunction caused her to turn on her CIA handler/father, she easily overwhelmed him in combat and weapon use.

Adam West (Family Guy) is a sleeper agent programmed by the Soviet Union, and upon activation he showed tremendous military combat might and knowledge.

Black Ops Assassins (Hλlf-Life series) are a well trained group of assassins, with a goal to cover up the Resonance Cascade event.

Agent 3 (Splatoon) is an effective field agent, always able to defeat any Octarian forces, including the five Great Octoweapons, they encounter and recover the Great Zapfish no matter how many times DJ Octavio steals it.

The first time DJ Octavio stole the Great Zapfish, Cap'n Cuttlefish (Splatoon) effectively served as Agent 3's handler before he was captured by the Octarians.

The Squid Sisters (Splatoon), Callie/Agent 1 (left) and Marie/Agent 2 (right) took on their grandfather's role after his capture and helped Agent 3 finish the fight, recover the Great Zapfish, and rescue him.

Octolings (Splatoon) are the Octarian equivalents of Agent 3.

DJ Octavio (Splatoon) was effective at handling all Octarian covert operations, including the theft of the Great Zapfish. 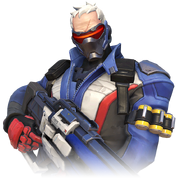 Soldier: 76 (Overwatch) was once a US soldier and founder of Overwatch not by special powers but by his particular military skills.

Master Chief Petty Officer John-117 (Halo series) is the master of special operations, becoming one of the most decorated war veterans in the United Nations Space Command.

Team 7 (Wildstorm/DC Comics) was a black ops military unit working for I.O. (International Operations). They are eighth in a series of elite commando units beginning with the 1940's Team Zero.

Shadow the Hedgehog (Sonic The Hedgehog), a member of Guardian Units of Nations.

Rouge the Bat (Sonic the Hedgehog), a member of Guardian Units of Nations.

Infiltrating East Pines I Regular Show I Cartoon Network
Add a photo to this gallery
Retrieved from "https://powerlisting.fandom.com/wiki/Special_Ops_Mastery?oldid=1448654"
Community content is available under CC-BY-SA unless otherwise noted.