The ability to switch or shift from one species to another. Variation of Shapeshifting. Not to be confused with Conversion. 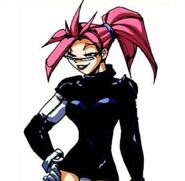