Medusa (Soul Eater) uses Vector based magic that can enhance her speed.

Enhance the speed of self and/or others.

The ability to enhance the speed of oneself or others. Sub-power to Velocity Manipulation. Variation of Physical Augmentation. Opposite to Speed Reduction.

The user can enhance the speed of themselves and/or others so that they can reach incredible velocities instantaneously, even reaching levels of speed that are usually beyond their limits alone.

Karl Ruprecht Kroenen (Hellboy) can enhance his speed and reflexes by cranking the key on his clockwork heart...

...making him fast enough to deflect bullets with his swords. 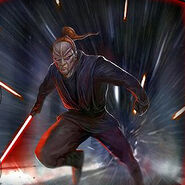 When the wielder shoots at their opponents, the Baby Face’s Blaster (Team Fortress 2) allows the user to upgrade their speed to a limit.

Drinking the Bonk! Atomic Punch (Team Fortress 2) will not only cause the Scout to become temporarily invulnerable, but also amplifies his speed to a certain extent.

When Cavendish's (One Piece) alter-ego Hakuba takes over, he gains incredible speed as he indiscriminately cuts down both allies and enemies alike.

In addition to being naturally gifted in melee combat, Ted (Zatch Bell!) uses body enhancement spells to increase the power and speed of his strikes.
Add a photo to this gallery
Retrieved from "https://powerlisting.fandom.com/wiki/Speed_Augmentation?oldid=1739497"
Community content is available under CC-BY-SA unless otherwise noted.