The Philosopher's Stone (The Flash) infused Wally with the Speed Force.

The power to charge target with speed. Sub-power of Velocity Manipulation.

User can charge the potential speed of target (whether object or person) to any magnitude, and after it reaches a desired speed, hitting the target will move at the speed it was charged at, regardless of how hard it was hit. 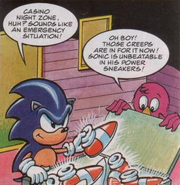 Due to his prolonged usage of them, Sonic's Power Sneakers (Sonic the Comic) have been charged up with his "high-speed energy," granting anyone who wears them speed equivalent to Sonic for a limited time.
Add a photo to this gallery
Retrieved from "https://powerlisting.fandom.com/wiki/Speed_Charging?oldid=1493751"
Community content is available under CC-BY-SA unless otherwise noted.