The power to create clones with speed. Sub-power of Afterimage Creation. Variation of Replication.

Eobard Thawne/Reserve Flash (Arrowverse) can use his super speed to create after-imaged copies of himself to appear in two places at once, by bouncing back and forth so fast that the human mind can't perceive the difference.

Jean Pierre Polnareff's Stand, Silver Chariot (JoJo's Bizarre Adventure Part III: Stardust Crusaders) speed is so great that it can create up to eight copies of itself as it moves between all these different positions simultaneously. 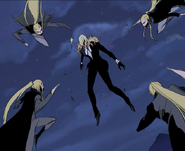 Racer (Fairy Tail)
Add a photo to this gallery